WONDR — All For You

The North Carolina born hip hop artist and male model WONDR offers a smooth-textured RnB ambiance, with an attractive hook set against affably warm rhythms, on his latest calm-mannered single, “All For You,” out now via Good Music All Day. 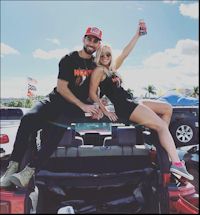 That song took him to his first festival billing at Summer Daze Music Festival in Raleigh NC, aand validated the individual credentials of WONDR, which had previously been seen in a duet [WONDR MUSIC]

When he’s not performing and modelling, WONDR drives the number 94 Hooters Chevrolet in the NASCAR Monster Energy Cup Series.

WONDR was first introduced to hip-hop when his older brother (now manager) burned a copy of Petey Pablo’s Diary of a Sinner: 1st Entry. From there, his love for music and ability to keep perfect rhythm grew.

He played drums and guitar in countless bands throughout his childhood covering everything from Hendrix and Muse to Alan Jackson and Kid Rock.

He found his calling writing raps in high school and after spending time in Brooklyn working and performing with artists in the underground scene, WONDR decided he was all in on a music career.