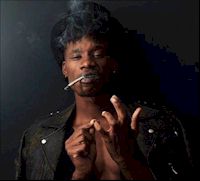 The hippie-souled rapper and self-proclaimed “bad guitar and bad piano player” Dales Anthony Doss aka CHARLES X [taken in reference to aviator Charles Lindbergh] has spent three years stirring heat on international stages, releasing three full-length albums “Revolution and the Day After” (2015), “Sounds of the Yesteryear” (2016), and “Peace” (2017), and writing more material to be released during 2019.

“Prozac” loco-motes itself to a throbbing beat, with the agitated feed and hectic tempo of X’s lyrics. This makes a hell-bent entrance as a sizzling first single from upcoming record, EID2, out early 2019.

The single is currently premiering on hiphopdx.com

Meanwhile, check the dope video for “Blown” released April 2018 [below]