He is an American rapper and record producer. A Los Angeles native, he is best known as the leader and co-founder of the alternative hip hop collective Odd Future. He has rapped on and produced songs for nearly every Odd Future release.

Tyler, The Creator has courted criticism for his use of homophobic and misogynistic slurs in his output. 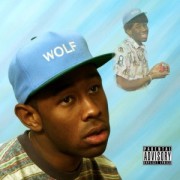 ‘Wolf’ is the upcoming third studio album by Tyler, The Creator. The album is scheduled to be released on April 2, 2013, by Odd Future Records and RED Distribution.

We listened to Domo 23 and here’s what we figgad:

A zig-zagging string theme cuts like a glass knife through a piece of meat with a real shudder.But the reminiscent synth and generically resonant rhythmic patterns (Rella) are not surprisingly new to the ear.

British listeners will enjoy the David Beckham reference – and those of a certain age will enjoy (even more) the One Direction threat … This creates the gulf between what is necessary for Tyler, The Creator ( trying to achieve an adult audience) – and what he actually gets … even more hostile criticism.

In the song he critiques the feedback he has received about his homophobic and misogynistic outings, but this is all done utilising sloppy, but fun, word-play. Is he really going to challenge to his regular listeners with this? Probably not. And the frivolity and lightness of the track will not promote any deep introspection either.